Me Lormeau acts on behalf of a variety of clients in all types of litigation, namely:

You suffered a prejudice because of someone else’s negligence? We will review every angle to get a fair compensation, either through a private dispute prevention and resolution process or the traditional judicial system.

The internet world is an ever-evolving environment and still, the upstream ways of creating digital content for the virtual world has mostly remained artisanal. Clients’ little behind the scene experience and their ignorance with regard to the creative process involved therein is the cause for serious misunderstandings.

If it can be established that a doctor has diverged from standard medical practices, and that by doing so it has caused some prejudices, harm or damages to a person, then a liability claim must be filed within the next three years.

From a legal perspective, a latent defect is one that is serious, non-apparent and existing at the time of the sale. As the buyer, you should rapidly give notice in writing to the seller. If you are the seller, take that notice very seriously and act on it. Every decision made during these early steps will be crucial in the following legal process.

Rules differ noticeably between commercial and personal lease. In the first instance, they are usually agreed upon by the two parties before the agreement is signed. In the second instance, leases of dwellings are rigorously regulated by the Civil code of Quebec.

Divided co-ownership has a lot of advantages, but it can also bring a variety of inconveniences. People who are elected to manage those micro-societies don't always have the expertise regarding the buildings’ right maintenance. In addition, the co-owners interests are rarely based on the same level.

Because of his experience and skills, Me Lormeau is often invited as a consultant and a lecturer in Research Ethics and Information technology.

For over 10 years, Me Lormeau has been sitting on a number of ethic committees dedicated to medical research in hospital environments, often presiding them. Along that enriching process, Me Lormeau has acquired a wealth of experience in different fields such as cardiology, oncology, public and mental health.

Me Lormeau is also very familiar with the process of introducing, marketing and selling innovative drugs in Canada, especially when it comes to human clinical trials. He is mastering the body of standards regulating the research ethics both in Quebec and in Canada.

Along his practice as a lawyer and his dedication to research ethics, Me Lormeau has also founded Meridium Technologies, a company dedicated to new information technologies. He was involved in the development of many internet portals and web applications for several governmental agencies as well as international e-learning programs.

Me Lormeau has a strong expertise in securing cloud computing and in internet managing all the same. Moreover, he is a very well-recognized speaker when it comes to those subjects. 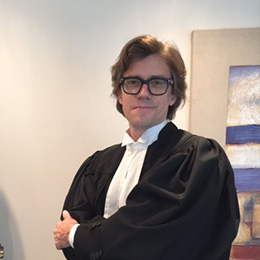 With a degree in Law and in Biological Sciences from the Université de Montreal, Me Lormeau started his career in the middle of the 1990's at the Centre de recherche en droit public of the same university, specializing in comparative law where he joined the team of Professor Bartha Maria Knoppers, a world leading expert in medical research ethics.

After graduating, Me Lormeau was recruited by the oldest and most prestigious law firm in Canada, McMaster Meighen, that has now become Borden Ladner Gervais, still the most important law firm in the country.

During his years with BLG, Me Lormeau’s practice focused on commercial litigation and in medical liability. As such, he was involved in a numerous liability cases related to various hospitals affiliated with McGill University.

Since 2002, Me Lormeau is working independently, sharing his time between private practice, counselling for the firm Biotika, working on research ethics for numerous Quebec hospitals and business projects. Indeed, Me Lormeau founded Meridium Technologies in 2003, a company that specializes in information technologies.